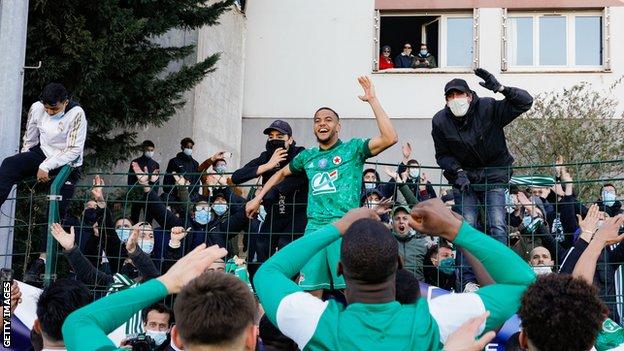 If Paris St-Germain are a Hollywood blockbuster, says David Bellion, then Red Star are an indie film directed by Ken Loach or Michel Gondry - one about the oldest and undoubtedly hippest football club in the French capital.

Making links between football and the arts comes naturally to Bellion, the former Manchester United and Sunderland striker who is now creative director at Red Star, a cult French third division team who like PSG have a brand that resonates with fans around the world, but for different reasons.

Founded in 1897, they sit at the heart of Saint-Ouen, a diverse, working class suburb of northern Paris, and were formed by Jules Rimet, the longest-serving Fifa president whose name gleams on the original World Cup trophy.

Absent from the top flight since 1974-75, they were in the sixth tier as recently as 2005 and their aging Stade Bauer home, opened in 1909, requires improvement works to meet Ligue 2 standards.

Meanwhile, just seven miles away towards the south-west of the city lies the Parc des Princes and its glamorous tenants PSG.

Ambitious owners have come and gone since their formation in 1970 but it was only following the arrival of the Qatar Investment Authority a decade ago that the club began to dominate French football, winning seven of the last nine titles.

That backing means PSG operate in a vastly different financial world and serve a largely contrasting audience to Red Star, as well as the city's third professional side Paris FC, who finished fifth in Ligue 2 last season and are beginning a new chapter of their own following recent investment from the Kingdom of Bahrain.

So far so different. But PSG and Red Star both seek the same fashion appeal and uber-cool Parisian energy, and their unique brands have led to global interest; PSG for the glitz and galacticos, Red Star as an underground melting pot of culture, diversity and social consciousness.

"What interests me in football is the creative direction, how to build an image and also tell the story of the club across the world," Bellion tells BBC Sport.

"Red Star has such a beautiful and strong history that it deserves to be heard by people.

"It has always been visionary. Rimet built it around the idea of no social status, as a sports and literature association - it was not only football, it was to promote a balance between social classes."

Those values remain. This year's Red Star shirt features customisable velcro badges, one with a message reading 'Refugees Welcome', and is sponsored by LinkedOut, a project helping homeless and disadvantaged adults to find work.

Last season the jersey doubled as an educational tool, with a pattern featuring important historical landmarks celebrating multiculturalism of the area and including an image of Rino Della Negra, the Red Star player and Communist resistance fighter who was executed under Nazi occupation in World War Two. Bellion says the stadium was used as a weapons stash.

"We developed some ideas that are very good because we are not scared about how it is interpreted, what we want is just to be sincere," the 38-year-old adds.

"It is really deep, we are not faking it. We are not buying culture, because we cannot afford to, but we love to create culture. That's why we do things differently." 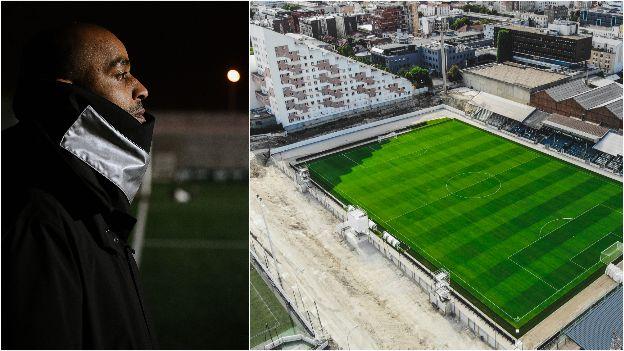 Bellion watches on, left, and Red Star's Stade Bauer home from the air

Bellion in 2016 finished his playing career at Stade Bauer, a ground he compares to Fulham's Craven Cottage, and found in film producer and Red Star president Patrice Haddad a man after his own heart.

Haddad took over in 2008 with the club in the fourth tier and has twice seen them rise to Ligue 2. They were relegated in 2019 and must return this season or face losing professional status under French regulations.

In recent years Red Star's global fan base has grown organically thanks to their unique philosophies, trendy, unconventional merchandise and a genuine identity that is deep-rooted within the club - they have been compared to and previously worked with St Pauli in Germany.

"One day I was in Tokyo, we played football there, and I saw a guy who had an orange Red Star jersey," says Bellion. "We only produced 20 of them for Colette, a shop in Paris!

"That doesn't make us rich, but when you look at that and think about the love and passion we put around the club, of course you feel a sense of happiness just to say it works, that some people are touched by this story."

Bellion enjoys collaborating with artists, musicians and photographers and has a fondness for British pop culture - the history jersey was created by London design studio AcidFC - but educating young players and moulding "well-built citizens" is his real passion.

"The story of the club, and I totally believed this even when I was a player, is that it is not only about performance," he says.

"Of course it is important to perform and try and get promoted, but we have maybe 500 kids at the club from under-6s to the reserves, so it is also important to build culture and education in their life.

"We want to use the football club to send a message; we want them to be well-built citizens, we need to work the body and feed the mind."

To do this the club launched Red Star Lab, hosting workshops to help academy players learn and draw inspiration from vocations outside of football. One of Bellion's favourites was seeing the teenagers handmake their own football boots with local craftsman Rakhmi.

"We know that maybe one kid out of a generation will make it as a professional, so what about the others?" he asks. "We are giving them other passions to try - photography, fashion, music. It is free, they watch, they learn.

"If 10 years down the line you see one of those kids say I'm working at the BBC because I fell in love with media, one says I am working at Nike, one at StockX, one at the art exhibition, this is a victory more important than winning a Champions League." 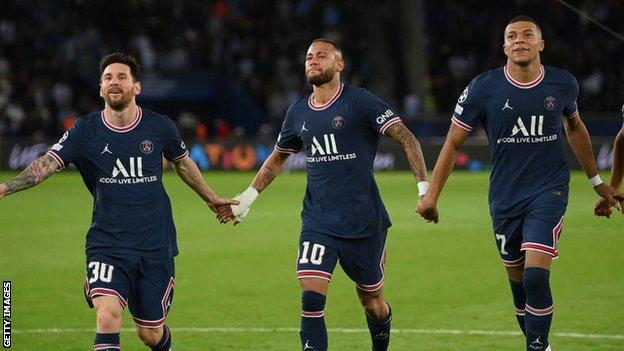 Even if PSG were defeated Champions League finalists in 2020, president Nasser Al-Khelaifi's investment has established Les Parisiens among Europe's elite. The continental title the club so craves is proving elusive, but there has already been huge commercial success off the pitch.

Three years ago, PSG entered into a partnership with Nike that would see them become the first football club to sport the Jumpman logo that is renowned with basketball legend Michael Jordan, selling the initial exclusive 40,000-item collection within a week.

The club's mandate, Allegre told a Harvard Business School study, is to connect with cultures beyond football and spread the brand in different directions. He pointed towards partnerships with Justin Timberlake and rapper Travis Scott, and to LeBron James wearing the club's shirt before an NBA game.

When a fan wearing a Thiago Silva shirt, bucket hat and checked shorts combo was dragged up on stage to be celebrated during a 2019 performance by Dave the rapper at Glastonbury, it was confirmation the PSG brand was successfully seeping into youth culture.

PSG's social media following has also rocketed, with Russell Stopford, chief digital officer, saying: "We are disrupting the world of football, on and off the pitch, in a uniquely Parisian style - that's the story we want to tell."

Club shirts have featured in designs at Paris Fashion Week, while players have appeared in promotional videos for Hollywood films. PSG even sold Rolling Stones-inspired merchandise when the band played in the city.

"It enabled us to reach fans who didn't necessarily follow PSG as a soccer club but who felt that wearing an item from the collection was cool from a lifestyle point of view," said Allegre.

In 2019 the club topped one million shirt sales and more than half of their Jordan collection went to customers outside France. They have since opened stores in Los Angeles and Tokyo.

Following the Qatar Investment Authority takeover, commercial revenues increased from £22m to £310m in eight years, according to the Harvard study. Al-Khelaifi believes the club can grow further still, towards "a value far in excess of €3bn". He wants PSG to be one of the top-three sport brands in the world. He wants them to be synonymous with Paris in the way the Yankees are with New York. 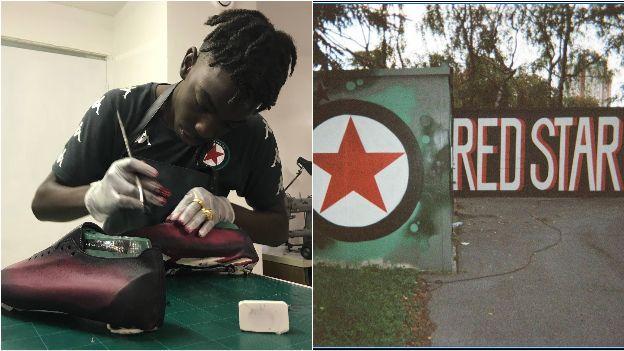 The Red Star Lab in action and, on the right, artwork at the Stade Bauer

The ambition is unquestionable but PSG are not without their critics; the club's spending on superstars such as Neymar, Kylian Mbappe and Lionel Messi has attracted accusations of both sportswashing and a disregard for Financial Fair Play, with La Liga chief Javier Tebas among the most vocal opponents.

Bellion has no issue with PSG. He jokes that Red Star are the Rolling Stones and Les Parisiens the Beatles but says the clubs respect each other's position in the city and the French football landscape. He is happy his own side have a "fantastic" story to tell.

"My son likes to watch Kylian Mbappe and Neymar and it is normal - it is entertainment to watch a big game, but it is blockbuster in terms of all the marketing," he says.

"Even if we had that kind of money we would not do that because we are more drawn into indie things, but we work with Foot Locker, we work with Vice. We don't see ourselves as snob people because we are deep into this kind of culture, that's just what we like, that is our vibe.

"We are attracting the crowd we like to attract and everybody is welcome, except people that are homophobic, that are fascist - if they are doing hate in our stadium they are not welcome, but that hasn't happened before.

"For me the foundation is youth, and I have confidence we are doing a good job. It is important to be serious about football, but not take ourselves seriously. There are things more important than just kicking a ball."